Kealios Achilles-Fang
My name is Gavin McClements. I am a wargamer and family man, living in Los Gatos, which is a suburb of San Jose, CA. Building terrain is one of my favorite aspects of the wargaming hobby - in fact, lately I've become more interested in making my battlefields "pop" than in actually playing.

10mm or 6mm terrain for Warmaster?

I just wanted to repost this thread from the Specialist Forums, as it is near and dear to my heart:

Very simply:
"How do you go about with terrain for Warmaster?" He was asking about sizes and terrain templates/area terrain, basically.

My response:
"I play a lot of 6mm, and only Warmaster in 10mm. For me, it made no sense to buy 10mm terrain, so i continue to invest heavily in 6mm terrain."

But the response I wanted to preserve for eternity was that of Gorrin of London:

"Returning to the OP, and to give the two-cents'-worth of input from a (very) seasoned, middle-aged grand scale gamer (newbie to warmaster - but experienced in 2mm, 6mm and 10mm in other rulesets)...well here goes...

I would suggest for inspiration on some "diorama" type boards you google  images search for grand scale terrain master "Bruce Weigle". His late 19th century boards are designed for the (small even for 6mm) Heriocs and Ros range but are a great reference for any scale up to 10-12mm. I believe he makes his buildings at around 60-70% of the scale of the figures to give the grand scale impression. I think that's about right. Scaling for 10mm I'd say that 6mm is about right, and that 10mm scenery is better suited to 15mm games. I agree with Kealios that owning a lot of 6mm and then investing in another bunch of scenery in a scale slightly larger (remember that most 6mm models are 6mm "foot to eye" and that most WM models - especially the infantry - are on the small side of 10mm) is fairly pointless. Total Battle Miniatures 6-7mm Pike and Shotte range is very "oldhammer" in style and the large range can be supplemented further with some of the Napoleonic range - the Napoleon in Russia range fulfilling much of my Kislevite needs.

When asked about the demise of Warhammer and "massed fantasy combat" (writing for his regular column in Wargames, Soldiers and Strategy magazine) Rick Priestley replied: "Massed combat? WFB is a 1:1 game with a skewed groundscale! 120 dwarfs versus 150 orcs isn't massed combat...it's a punch-up in a pub car-park!". I think that how we think about scenery in WM game is a throwback to 1:1 games (WFB is what I'd refer to as "large skirmish") where we are more comfortable with buildings being roughly the same scale as the models, if you want to think of your 30 WM orcs representing 30 orcs and 1 building representing one building in WM then do so by all means...but I don't understand why in those circumstances you wouldn't just play Warhammer with a bit of command and control thrown in.

By its very nature WM is a grand scale game representing massed combat with an emphasis on command and control and which largely plays down the differences in races emphasised in WFB. To play any game at grand scale requires you to immediately get your head around the abstraction of what the battlefield and the models represent. I think from Rick Priestley's original introduction to the game he specifically references that a 3-base regiment represents around six-hundred troops with a five frontage and 720 for those with six. Those of you with large armies, represent this for spectacle sake on your table. It will take twenty full regiments and sixty stands, two deep and thirty across to represent a single regiment in a four-deep line formation in 1:1 scale. They will take up a 1.2 metre frontage on your table. That is what your single 3-stand unit represents. Place a single 10mm scale cottage in front of them, how many of those 600 troops are shielded by that cottage? The regiment can no more claim a "cover" bonus or restricted LOS from that building than you could take shelter from a musket volley by hiding behind a tennis ball.

The truth is that in grand scale games, most of your scenery is just that...scenery - and therefore just there for show. It may sound counter-intuitive, but if you want to represent a farm-house and a barn on a grand scale battlefield - it should not really have any bearing on movement, shooting or LOS. A regiment would not be able to shelter behind nor would they be able to hide behind these buildings which compared to the footprint of the regiment would be absolutely tiny. Likewise the regiment should be able to move through the terrain feature without any penalty with the represented troops affected by the building - maybe around five percent of them - simply running to catch up with their comrades if they were slowed. Any set of buildings whose real-to-scale size could not be imagined to be able to fully obscure at least 200 troops (1 stand's worth) can be ignored. I take a stand in line formation to be in real scale terms to be 4 ranks deep so in dwarf terms that's 60 abreast (45 metres?), any obstruction that I don't think is big enough to cover this size of frontage I ignore as terrain feature.

What is important in grand scale games is agreeing what terrain features ARE important and agreeing on them battle to battle. In my experience the things you need to represent are:

Built up areas - an area containing more than two or three houses from a large hamlet, to villages, towns and parts of cities. The outskirts of the built up areas should be clearly delimited (say with brown cloth and buildings placed on them. The buildings themselves are individually irrelevant (unless specifically required to be relevant such as a temple etc) and the entire built up area should be treated as dense woods. Main roads can exist through the built up area if the players wish but units, must traverse them in column formation only (think I've see rules for these in WM somewhere - something like all sides of a column count as flanks and/or rear).

Woods and forest - as above, but with trees instead of buildings of course (!)

Specific areas of difficult ground - marshes, muddy ploughed fields (such as at Agincourt)

Specific defendable obstacles - walls, ridgelines, sunken roads, earthowrks etc. In these instances I am taking about specific and important defendable battlefield positions only. For example, the stone wall at Fredricksberg, the walls of Hougamont at Waterloo, the sunken road at Antietam, the Pratzen Heights at Austerlitz.

Everything else should have little if no effect, most hedges, gentle slopes (although these may not provide a defendable bonus they may obstruct LOS), thin treelines, small sections of wall, individual buildings or those deemed not to represent "built up areas" as defined above.

Sorry about the epic post! I've probably previously bored all concerned with my ACW terrain but I will try to take some pictures with WM figures to give you an idea - you'll just have to forgive the obviously ACW buildings as I don't have any WM 6mm buildings painted up!!

So for me...I prefer 6mm for 10mm games. Not least because I ignore most buildings the bigger they are the more they get in the way! And also...the 6mm range is massive compared to the 10mm ranges. Irregular miniatures even do a set of metal roofs, doors and windows with pegs you can just push into balsa to make your own. Of course scratch building buildings at this scale in very easy as well compared to 28mm.
2-cents worth...I've spewed out a fool's fortune!!"

Hope this was informative! I've posted these before, but some 10mm Dark Elves in my TBM 6mm village... 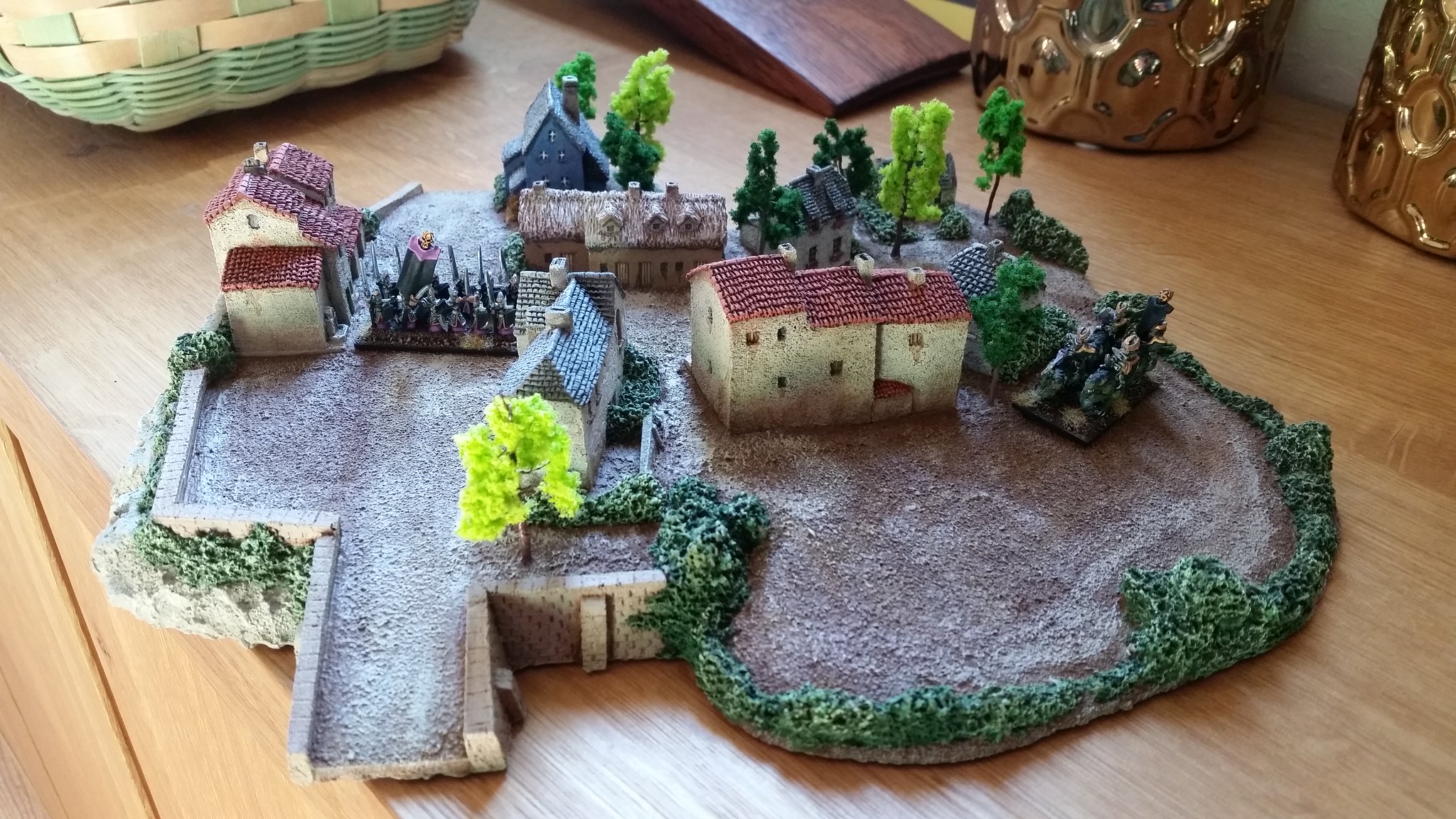 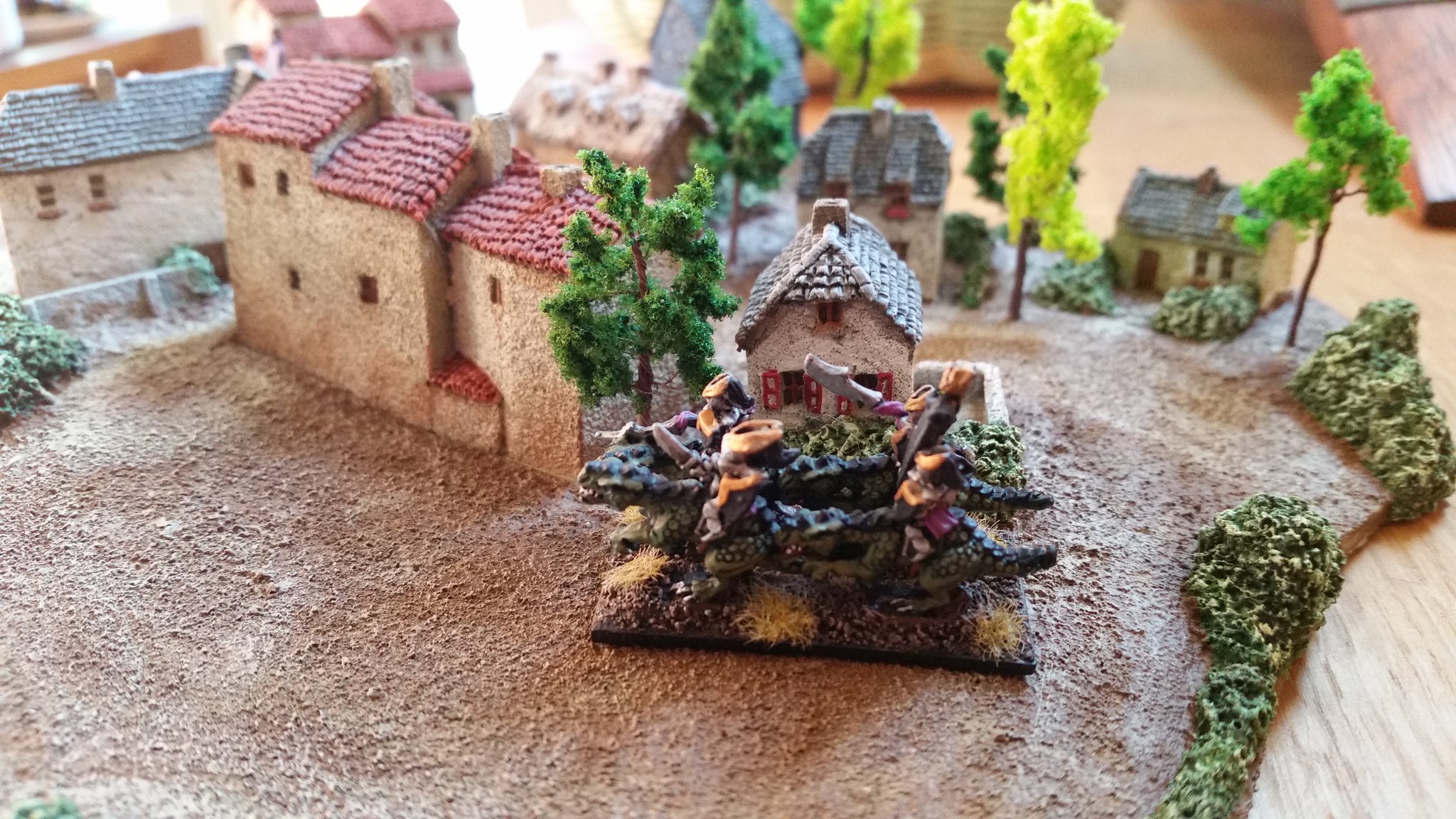 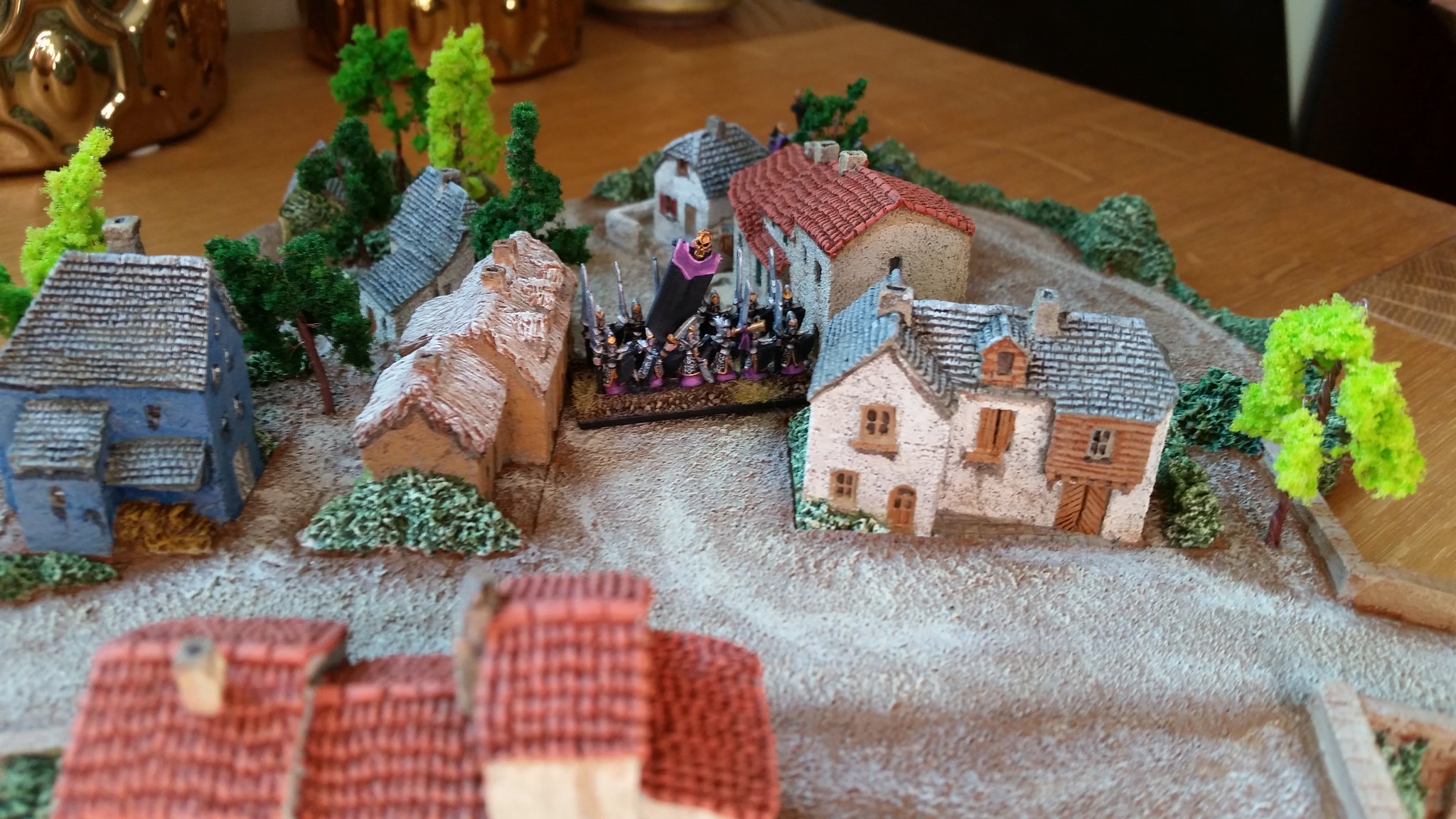 Rulesets I use and love